Medisoft backup, if you try to run a backup from a recent version of Medisoft (v18 – Medisoft v21), you may get a message saying that “A Medisoft backup is already in progress by [user].” There is a file called hotbackup.txt that gets created in the root of the medidata folder (on your server if you have Network Professional) during certain Medisoft backups, and Medisoft normally deletes the file itself when the Medisoft backup is done. If the file does not get deleted, it will cause Medisoft to think that there is a backup running and prevent you from running a new one. 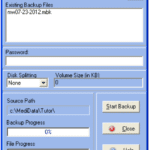 To get around this issue, simply locate this hotbackup.txt file and delete it, and you will then be able to run the Medisoft backup. The video tutorial below will demonstrate how to do this.

Consider Backing up data files everyday so you can restore lost data to the most recent data before the files were damaged or corrupted, it’s essential that this Medisoft backup is done to prevent hours and hours of repeating old data entry. If you are working with multiple practices, each practice will have its own set of backup files. Doing your backups within the Medisoft program is a dependable method.

Also consider backup rotations think about if one day you come to the office and you’re not able to get into the door due to a fire flood or the server was installing. Think about having your backup outside the office. Some backup methods involve using a physical drive and carry that drive outside the office, the problem with this method is if this drive got lost or stolen and you happen to have 500 or more patients, you will be subject to HIPAA violation and other headaches. We highly recommend cloud backup, the cloud backup is a HIPAA secure and you never have to worry about carrying your backup outside the office.