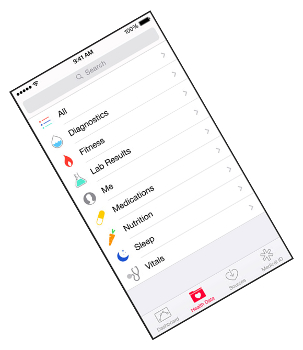 On June 2nd, Apple Inc. announced its HealthKit platform, “a single place that applications can contribute to a composite profile of your activity and health.” Along with Samsung’s SAMI (Samsung Architecture for Multimodal Interactions) and Google’s anticipated Google Fit, HealthKit holds out the promise of having one’s pertinent health information available anywhere, anytime.

While Apple has remained characteristically silent about any potential new hardware, reports indicate that the Cupertino company is preparing to launch around October what is being referred to as the iWatch, a wearable device which may monitor steps walked/run, sleep activity, heart rate, and other biometric information. There are devices on the market that already collect this type of data (such as the UP band by Jawbone, the Nike+ FuelBand, and the FitBit Flex, among others); what sets Apple’s initiative apart from these existing solutions is the HealthKit database that the framework calls for.

The databases created by app developers will allow for the storage and querying of data collected from the expected iWatch (as well as HealthKit-enabled third-party devices) and data input by users directly into apps including the new Health app to be included with iOS 8, and Apple’s partnership with major Electronic Health Records vendor Epic Systems means that patients “will be able to get closer in sharing their information with their doctors,” according to Craig Federighi, Apple senior vice president of software engineering. Additional integration with the Mayo Clinic can allow the app to notify the hospital when the patient gets data (for example, a blood pressure reading) outside the patient’s normal parameters, resulting in proactive and timely contact from a healthcare provider.

Samsung is also moving to provide hardware and software to take advantage of the growing healthcare data market. Its open software and hardware stance and Digital Health Challenge hope to “stimulate innovation… through the use of highly accurate, non-invasive sensors working in conjunction with advanced algorithms.” And even though there are no Android Wear devices obtaining health data yet, Google is ramping up its efforts to compete with Apple and Samsung. California EHR company Drchrono has already developed its own app for Google Glass, allowing healthcare professionals to record patient visits and surgeries and attach the generated video to the patient’s record and also share it with the patient, showcasing some of the potential of pairing wearable technology with healthcare IT.

More and more electronic devices to measure biometric information are being developed, many of which can communicate with EHR systems such as Lytec MD and Medisoft Clinical. Contact a healthcare technology consultant at Microwize Technology for more information.