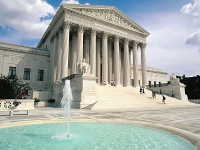 The United States Supreme Court began debating on Monday the potentially landmark lawsuit regarding the constitutionality of President Barack Obama’s sweeping health-care overhaul.  While the first of three days of oral arguments focused on the legal particulars of whether or not the reform law’s key provision was in fact a “tax,” Tuesday’s debate concerned Congress’ power, or lack thereof, to require Americans to secure a health insurance plan or be penalized.  The conservative-leaning court has been skeptically questioning the government’s top attorney, U.S. Solicitor General Donald B. Verrilli, Jr. today, and the requirement for states to expand the Medicaid program will be tackled as well.

The Supreme Court may well decide that the executive and legislative branches are best suited to resolve these conflicts, particularly considering the touchiness during an election year.  While the justices might overturn the individual mandate, it is unlikely that the entire Patient Protection and Affordable Care Act will be struck down.  As of this writing, the justices seem to be evenly divided on the mandate, with Justice Anthony Kennedy a possible swing vote.  Any decision could significantly affect government initiatives like the HITECH Act and impact the adoption of EHR (Electronic Health Records), like Medisoft Clinical, Lytec MD, Practice Choice, Allscripts MyWay,  and simplifyMD, as well as other software and hardware technology in the healthcare field.

Microwize Technology remains committed to empowering physicians with innovative technology and solutions that improve quality of life, reduce the cost of healthcare, deliver superior patient care, and provide employees with meaningful work and growth opportunities, and as such we are following the Supreme Court’s arguments closely.  Whatever is decided, we will be at our physicians’ and practices’ sides to ensure smooth adoptions of the latest technologies.