Meaningful Use Down for the Count 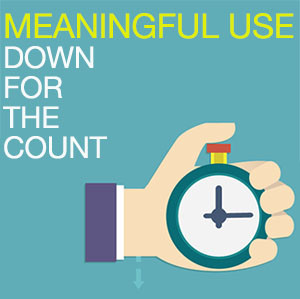 According to the Centers for Medicare and Medicaid Services (CMS) and The Office of the National Coordinator for Health Information Technology (ONC) they have been working with physician and consumer communities and have listened to their needs and concerns – and this has led to the demise of Meaningful Use.

This came on the heels of American Medical Association (AMA) President Steven J. Stack, MD recently stating, “Doctors want to spend their time with patients, not measuring the number of clicks. We want a successful transition to digital health records, and we also want the new Medicare law to succeed. It will take thoughtful changes in the regulations to support physicians as they treat patients through new models of care.”

Since the release of Meaningful Use, the AMA, Healthcare Information and Management System Society (HIMSS), and many other groups have written many letter CMS reporting that MU requirements demand too much in too short a time and that rushed applications could cause patient harm.

With the release of Medicare Access and CHIP Reauthorization Act of 2015, or MACRA, in April 2015 the landscape has changed.  MACRA adopted a new physician payment framework based on quality and value. The AMA has also called to leverage the power of Electronic Health Records (EHRs) for enhancing patient care, improving productivity, and reducing administrative costs and they would like challenge of usability to be in the forefront so that any regulations allow physicians to maximize the use of EHRs in place today, while allowing vendors to continue to innovate and create new technologies.

DeSalvo stated, “We have to get the hearts and minds of physicians back. I think we’ve lost them.” More details of the new regulations will be released in the Spring.

Some of the top names in EMRs today include Medisoft Clinical, Lytec MD, McKesson Practice Choice, and Greenway PrimeSUITE.  Healthcare technology consultants at Microwize Technology can give you more information on any of these highly rated EMRS.  If you are looking to update your system or switch to a new system, call Microwize Technology today.