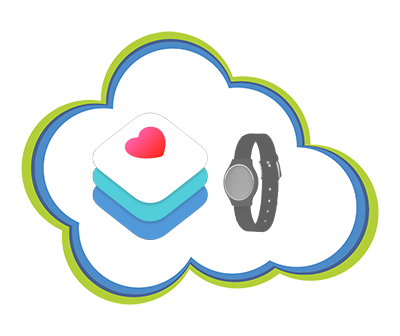 mHealth is an abbreviation for mobile health, a term used for the practice of medicine and public health supported by mobile devices. The term is most commonly used in reference to using mobile communication devices for health services and information and includes technology such as apps (applications), wearables and cloud services.  The market for these technologies is growing and as more options become available, doctors and patients must take account of options and decide how to best utilize the products and services.

Wearables are “smart” devices that are worn and monitor everything from sleeping habits, to activity levels, to body temperature, to heart rate – – with more possible uses, such as monitoring blood sugar level, being explored every day.  The devices are very popular and this has doctors realizing how valuable they are in monitoring patient health.  The much anticipated Apple Watch (due to arrive in March) will be one of many devices already available, such as the Fit Bit, Nike+ Fuelband and Jawbone Up mHealth devices.  Though not truly a wearable, even one’s smartphone is part of the picture as it runs the apps that connect with the devices and runs independent apps such as pedometers.  According to a study published in the Journal of the American Medical Association, smartphone and wearable step counters are about as accurate as more traditional pedometers, differing an observed steps count by no more than 1%.

Most devices come with an associated app that gathers the data from the device and displays statistics of all sorts, allows the ability to share with selected ‘friends’ or other apps and programs, and can be set to give alerts when certain goals are met or not met.  One such app, Apple HealthKit, is being tested at 14 leading US hospitals to track patient care and develop patient-physician-provider interaction.  Over 600 developers have integrated Apple HealthKit into their health and fitness apps.

These apps communicate with other apps and many keep data in the cloud.  There are numerous healthcare specific cloud based services such as software for EHRs, storage options and could computing infrastructure. Competition between cloud providers has the companies offering increasingly powerful functionality that adds value to health IT departments such as cloud storage and application services.

Medisoft Versions 19 and 20, and Lytec Versions 2014 and 2015 offer a free mobile app to physicians for the iPhone and iPad. It allows physician offices to use an electronic superbill (this is a great idea for physicians that don’t have EHR/EMR that send billing codes to the billing system).  Mobile software also allows for electronically capturing charges and diagnosis entries, entering charges and diagnoses from anywhere, submitting claims to billers at the tap of a button, viewing schedules on mobile devices, and tracking practice performance.  On the patient side, Medisoft Version 20 and Lytec 2015 will have a mobile app (for the iPad and iPad mini) that allows patients to enter information regarding demographics, insurance coverage, medications and allergies.  The technology is empowering both physicians and patients.